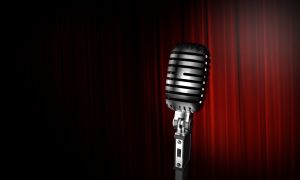 In previous installments, we discussed self-promotion and took a hard look at what the Bible says. In Part 2, we learned from Scripture that everything we do should be for the Lord and not for men (Eph. 6:7; Col. 3:23). Therefore, if we look at what we do—write and sell books—from a biblical perspective, we’ll see that it’s really God we are/should be promoting and not ourselves. We are merely microphones for a greater purpose. We glorify Him through the beauty of words, through the spiritual struggle of the characters in our stories, by depicting faith and goodness winning the war over evil, by offering a message of hope to a needy world. In essence, as John Piper pointed out, God has called us to have an influence for truth in this world—and that calling requires death to self. “He who would come after me, let him deny himself and take up his cross and follow me.” How can we promote ourselves if we’re to be “dead” to self? That would be like giving an award to a corpse.

In short, according to Scripture, we should be God promoters, not self-promoters. Unfortunately, the world gets caught up in the cult of personality, and we can’t control whether people see us as celebrities or “famous people” because we happen to write and publish novels. But what we can do when this occurs is point them to the One who let us borrow these gifts during our brief time on earth. After all, without Him we are nothing.

But what if we go astray? What if ego trumps calling and we find ourselves reveling in—and even seeking—the praise of man? What did Jesus say in Matthew 6? “Watch out! Don’t do your good deeds publicly, to be admired by others, for you will lose the reward from your Father in heaven” (NLT).

Sobering words. Convicting words. Words that go against the grain of what the world tells us every day.

We’ve all been there, haven’t we? A friend slaps us on the back and says, “Wow, that was the best story I’ve read in years.” Do we say, “Well, praise the Lord” or do we allow our egos to swell? We are so prone to words that caress our pride (I’m preaching at myself here), as if we wrote that story out of our own creativity. As if God had nothing to do with any of it. As if we have fallen prey to the world’s philosophy of self-exaltation. By taking for ourselves the glory He alone deserves, do we not in essence deny Him?

What a tragedy, for we are mere stewards of His gifts. Whatever greatness we achieve has nothing to do with our own greatness. It’s all about God’s greatness. So then why would we accept glory for the gift God let us borrow for a while? All glory should go to the Lord (1 Cor. 10:31). If not, as Matthew 6 says, we’ll have our reward. We’ll get no reward for that good deed—for that novel we wrote—in heaven.

So what is our motive for writing and promoting our books? Are we truly writing to glorify God? Or are we seeking fame and fortune—to be the next best-selling author with the six-figure book deal? If so, what a tragedy, for we are called to so much more.

Why do you write? Why do I write? Is it so that we might experience what the world calls success? Is it for recognition? Awards? Money? Is it so we have a means whereby we can measure our own self-worth?

We write to tell [the world] that [God] is here with us. . . . As writers, we are one small part of God’s voice answering the cries, telling men and women to hold fast because there’s hope.

There is hope, and God has called us to glorify Him by publishing that hope. That must be why we write and market our books. Anything less will be void of heavenly reward.