It is time for a FIRST Wild Card Tour book review! If you wish to join the FIRST blog alliance, just click the button. We are a group of reviewers who tour Christian books. A Wild Card post includes a brief bio of the author and a full chapter from each book toured. The reason it is called a FIRST Wild Card Tour is that you never know if the book will be fiction, non~fiction, for young, or for old…or for somewhere in between! Enjoy your free peek into the book!

You never know when I might play a wild card on you!

***Special thanks to Jon Wooten of Charisma House for sending me a review copy.*** 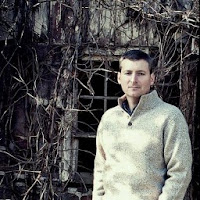 Mike Dellosso is the author of numerous novels of suspense, including Darkness Follows, Darlington Woods, and Scream. He is an adjunct professor of writing at Lancaster Bible College and frequent contributor to Christian websites and newsletters. Mike is a member of the American Christian Fiction Writers association, the Christian Fiction Blog Alliance, the Relief Writer’s Network, and FaithWriters, and he plans to join International Thriller Writers. He earned his BA degree from Messiah College and his MBS from Master’s International School of Divinity. He lives in Hanover, PA, with his wife and daughters. Hometown: Hanover, PA
Visit the author’s website.

Gas station attendant Marny Toogood thinks it’s just another ordinary day on the job until an urgent message from a young girl in the backseat of a car draws him into a daring rescue attempt. Now he is on the run with Esther and William Rose from their insane “uncle” who thinks it is his mission from God to protect William, a boy with incredible faith that gives him supernatural powers.

As they face kidnapping, underground cults, and other evils, can Marny trust the simple faith of a child and stand his ground against a power so twisted?

The night Marny Toogood was born it rained axheads and hammer handles.

His grandfather made a prediction, said it was an omen of some sort, that it meant Marny’s life would be stormy, full of rain clouds and lightning strikes. Wanting to prove her father wrong, Janie Toogood named her son Marnin, which means “one who brings joy,” instead of the Mitchell she and her husband had agreed on.

But in spite of Janie’s good intentions, and regardless of what his birth certificate said, Marny’s grandfather was right.

At the exact time Marny was delivered into this world and his grandfather was portending a dark future, Marny’s father was en route to the hospital from his job at Winden’s Furniture Factory where he was stuck working the graveyard shift. He’d gotten the phone call that Janie was in labor, dropped his hammer, and run out of the plant. Fifteen minutes from the hospital his pickup hit standing water, hydroplaned, and tumbled down a steep embank- ment, landing in a stand of eastern white pines. The coroner said he experienced a quick death; he did not suffer.

One week after Marny’s birth his grandfather died of a heart attack. He didn’t suffer either.

Twenty-six years and a couple of lifetimes of hurt later, Marny found himself working at Condon’s Gas ’n Go and living above the garage in a small studio apartment George Condon rented to

him for two hundred bucks a month. It was nothing special, but it was a place to lay his head at night and dream about the dark cloud that stalked him.

But his mother had told him every day until the moment she died that behind every rain cloud is the sun, just waiting to shine its light and dry the earth’s tears.

Marny  held  on  to  that  promise  and  thought  about  it  every night before he succumbed to sleep and entered a world that was as unfriendly and frightening as any fairy tale forest, the place of his dreams, the only place more dark and foreboding than his life.

On the day reality collided with the world of Marny’s night- mares, it was hotter than blazes, strange for a June day in Maine. The sun sat high in the sky, and waves of heat rolled over the asphalt lot at the Gas ’n Go. The weather kept everyone indoors, which meant business was slow for a Saturday. Marny sat in the garage bay waiting for Mr. Condon to take his turn in checkers and wiped the sweat from his brow.

“So it’ll probably get up to ninety-five.”Mr. Condon rubbed at his white stubble. “Ayuh.”He was sixty-two and looked it. His leather-tough skin was

Mr. Condon made his move then squinted at Marny. Behind

him Ed Ricker’s Dodge truck rested on the lift. The transmis-

sion had blown, and Mr. Condon should have been working

on it instead of playing checkers. But old Condon kept his own

the best, and cheapest, mechanic around. He’d been getting cars

and trucks through one more Maine winter for forty years.

Marny studied the checkerboard, feeling the weight of Mr.

Condon’s dark eyes on him, and was about to make his move

when the bell chimed, signaling someone had pulled up to the pump island. Condon’s was the only full-service station left in the Down East, maybe in the whole state of Maine.

Despite the heat, Mr. Condon didn’t have one droplet of sweat on his face. “Cah’s waitin’, son.”

Marny glanced outside at the tendrils of heat wriggling above the lot, then at the checkerboard. “No cheating.”

His opponent winked. “No promises.”

Pushing back his chair, Marny stood and wiped more sweat

from his brow, then headed outside.

The car at the pump was a 1990s model Ford Taurus, faded blue

with a few rust spots around the wheel wells. The windows were

rolled down, which probably meant the air-conditioning had quit

working. This was normally not a big deal in Maine, but on a rare

day like this, the driver had to be longing for cool air.

Marny had never seen the vehicle before. The driver was a large

man, thick and broad. He had close-cropped hair and a smooth,

round face. Marny had never seen him before either.

He approached the car and did his best to be friendly. “Mornin’.

The driver neither smiled nor looked at him. “Fill it up. Regular.”

backseat. A woman, really, looked to be in her early twenties. She

sat with her hands in her lap, head slightly bowed. As he passed

the rear window she glanced at him, and there was something in

her eyes that spoke of sorrow and doom. Marny recognized the

look because he saw it in his own eyes every night in the mirror.

He smiled, but she quickly diverted her gaze.

As he pumped the gas, Marny watched the girl, studied the

back of her head. She was attractive in a plain way, a natural pret-

tiness that didn’t need any help from cosmetics. Her hair was rich

brown and hung loosely around her shoulders. But it was her eyes

that had captivated him. They were as blue as the summer sky, but

so sad and empty. Marny wondered what the story was between

the man and girl. He was certainly old enough to be her father. He

looked stern and callous, maybe even cruel. Marny felt for her, for her unhappiness, her life.

He caught the man watching him in the side mirror and looked at the pump’s gauge. A second later the nozzle clicked off, and he returned it to the pump. He walked back to the driver’s window. “That’ll be forty-two.”

While the man fished around in his back pocket for his wallet, Marny glanced at the girl again, but she kept her eyes down on her hands.

“You folks local?” Marny said, trying to get the man to open up a little.

The driver handed Marny three twenties but said nothing. Marny counted off eighteen dollars in change. “You new in the

area? I don’t think I’ve seen you around here before. Lately, seems more people have been moving out than in.”

Still nothing. The man took the money and started the car. Before pulling out he nodded at Marny. There was something in the way he moved his head, the way his eyes sat in their sockets, the way his forehead wrinkled ever so slightly, that made Marny shiver despite the heat.

The car rolled away from the pump, asphalt sticking to the tires, and exited the lot. Marny watched until it was nearly out of sight, then turned to head back to the garage and Mr. Condon and the game of checkers. But a crumpled piece of paper on the ground where the Taurus had been parked caught his attention. He picked it up and unfurled it. Written in all capital letters was a message:

HE’S GOING TO KILL ME

I received a copy of this novel barely a week ago and am still working on it. I am enjoying my read and hope to post a review after I’ve finished it. Congratulations on another novel, Mike!

One thought on “Book Review: Frantic by Mike Dellosso”