Note: Previously published as a guest post at Thoughts of a Sojourner

My Unconventional Path to Publication 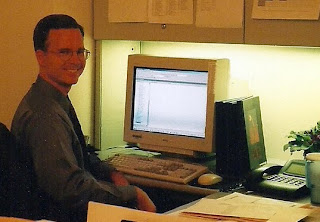 My boss sank into a chair across from my desk, hung his head, and delivered news no employee wants to hear. “We’re making cutbacks here at the college, and I’m afraid”—he took a deep breath and let it out—”your position is being eliminated.”

A two-by-four to the side of the head couldn’t have jolted me more. What!? They’re cutting my job?

It was January 13, 2006, and I was sitting in my office (see photo) at Northland Baptist Bible College (now Northland International University), where I’d been serving as an editor since 1995. With a BA in print journalism, I was in charge of editing and writing content for all sorts of campus publications: promotional brochures, a magazine, the academic catalog, the yearbook, even the website. And now, in five months, I’d no longer have a job.

My stomach churned at this news. How was I going to provide for my wife and kids?

There’s no way to put a happy face on this period of my life. This was a sobering, discouraging time for me and my family, and I’d be a liar if I said I didn’t struggle in my spirit about the whole situation. But God had hard lessons for me to learn about depending on Him, and He was quietly working behind the scenes (as He often does) to bring to fruition a dream I’d had since I was a kid.

I’d been writing all sorts of wild tales since I was a child: short stories about pirates and space ships in junior high, a novel-length Agatha Christie copycat in high school, and a science fiction novel I finished the summer after my senior year in college.

From there, I published my first short story in the Regular Baptist Press Sunday school papers. I remember my excitement when the check arrived in the mail. I’d published numerous news stories during my journalism internship at a newspaper in the South, but now I was a published fiction author! Being rewarded for my hard work only revved my engine to publish a variety of more short stories and articles.

But it wasn’t enough. I’d always wanted to write Christian novels, so I wrote three of them for young adults. The problem was, I couldn’t find any publishers who wanted them. So what did I do? Even if nobody publishes them, I decided, I’ll just keep writing them because I can’t help myself. I also felt like each novel was just a little better than the one preceding it. Maybe if I just kept writing long and hard enough . . .

Somewhere along the way, a considerate editor wrote on one of my many rejection letters, “Have you considered writing for adults?” I thought, Why not? But by this time, I was beginning to wonder if I was barking up the wrong tree. Maybe I didn’t have what it takes to be a published Christian novelist. Maybe all those childhood dreams had been for naught. But then I thought, God must have given me the desire to write novels for a reason.

In a last-ditch effort, I decided that I needed to take my writing to the next level by finding a writing mentor. In 2002 I enrolled in a novel writing correspondence course through Writer’s Digest School. Writer’s Digest matched me up with another Christian author, a published novelist of romantic suspense, Bea Carlton. This was exactly what I needed—an industry professional to read my chapters and tell me, “This is really good. It’s not a question of if you’ll be a published but when.”

Bea was my cheerleader who gave me the advice to grow and the confidence I lacked to keep going. She coached me through the plot outline, the development of my main characters, and the first fifty pages of a Christian suspense novel I was calling Now You See Him.

But when the course was over, I didn’t stop. Four years and two daughters later, I finally finished the manuscript. Maybe I wasn’t the fastest novelist in the world, but at least I’d finished what I set out to do.

But then the same old problem was back: I was mailing out query letters and novel proposals left and right, only to receive rejection letters in response. If you’ve been on this journey, then you understand the depressing sense of failure that comes when you’ve poured literally thousands of hours into a project, only to realize nobody likes it.

At this point, I was seriously thinking about chucking the dream. No matter how hard I work, I told myself, I’m never going to be good enough. Success only happened to other people. I asked God, Why did You give me this drive to write novels if You didn’t intend for me ever to publish them?

Then in January 2006, only a few days before my layoff news, a two-page letter in the mail changed everything. That previous fall, I’d mailed a query letter to Steve Laube, a Christian literary agent in Arizona, about Now You See Him. Amazingly, he’d replied with interest and wanted to see the full manuscript.

Now, reading what he thought of my novel, my heart sank. As expected, Mr. Laube was declining to be my agent. But then I sat up straighter. This was far from the standard rejection letter. He said that only a tiny percent of submissions get as far as mine did. He said I was very close to having a publishable manuscript, and he listed several areas of my story that he felt needed improvement.

Oh wow! So if I made the changes, maybe somebody would like my novel after all. I suddenly realized I was close—very close—and began making the changes Mr. Laube had recommended.

But then, just a few days later, I was walloped across the side of the head by the news that I was losing my job, and I had no idea what I was going to do. But by the time my job ended at the university, I had begun editing for several clients from home. Yes, I needed to work as an early-morning FedEx package handler for a while to pay the bills, but God was providing for my family. Maybe this work-at-home editing opportunity would pan out if I built up my client base.

Maybe so, but the time demand to work FedEx, to literally build a home office into my house, and to find more clients required me to lay aside the oh-so-close-to-publication novel for a while. I accepted the fact that providing for my family had to come first.

Fast-forward to the spring of 2007. While contacting various Christian publishers and inquiring about book projects I could edit from home, I e-mailed an editor at Kregel Publications. When the editor saw on my resume that I’d written several as-yet-unpublished novel manuscripts, he asked me to submit one for review. With no serious expectations (after all, I’d done this song and dance a few times before), I sent him Now You See Him.

You guessed it. A few months later, the editor at Kregel e-mailed me, requesting the full manuscript. By August, after sitting on pins and needles for what seemed like an eternity, I received the astonishing news that Kregel was going to publish my novel! I ran to my wife with the news, and we jumped up and down and hugged each other. 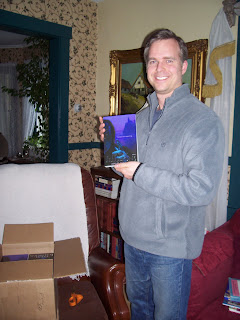 The Rest of the Story

I couldn’t believe what was happening. I was 38, and my childhood dream was finally coming true after what had seemed like a very long journey. (Better late than never, right?)

But it had been no easy or conventional path. I believe that it was only after I set my dream aside to provide for my family that God decided to make it come true. Perhaps He wanted to see if I was willing to turn my back on my childhood dream and find my fulfillment in Him alone.

So now you know the story behind the publication of my first Christian suspense novel, Fatal Illusions (Kregel Publications, March 2009). Though I’ve always loved to write stories, I seriously doubted that I’d ever write a novel good enough to be published. That’s why when others ask me about my publication success, I’m careful to give God the glory.

After all, He opened publication doors I couldn’t open for myself.

A Word to Writers

Maybe my journey sounds similar to yours. Maybe you’ve been writing for years and seeing little success as the result of your efforts. Maybe you’re even ready to chuck the dream like I almost did.

The best advice I can give anyone is “Don’t ever give up!” Even if the constant rejection makes you feel like a bug stuck to the rug, never, ever stop writing. If God gave you the desire and aptitude to write, He’s given you a gift He doesn’t want to see go to waste.

Write as often and as passionately as you can, but be willing to set aside the dream. Make God your dream and seek Him first (Matt. 6:33). Then, if He wants to publish your novel, He’ll open the door. Maybe not according to your timetable. But definitely according to His.

What about you? Do you have any unusual stories about how God opened the door to publication for you. Or maybe God used a major disappointment in your life to turn things around for His glory. Care to share?

4 thoughts on “From Layoff to First Novel Contract”